One of my most unusual concert locations was the Kalaupapa Leper Colony on the island of Molokai in Hawaii.

I spent four days there after being invited to do a concert, and loved the place and the people.

A view of the Kalaupapa Leper Colony, where Ann performed, by former patient and colony historian, Henry Nalaielua, author of “No Footprints in the Sand”

After the concert, I went to the tiny pub. One of the men sitting at our table asked if I would like a beer. I thanked him and said, “‘yes.”
With the tops of his wrists, which were missing his hands, he pushed the beer from which he had been drinking across the table to me. All talking at the table stopped as I took a sip.
The man then said to me, “Why would you risk taking a drink from my bottle when you know I have leprosy?”
Without even thinking, I responded, “It never crossed my mind that you would endanger me, knowing how you must have suffered over the years.” Then I laughed and said, “I hope I’m not mistaken about that!”
The room broke into much laughter and we resumed with our evening. They invited us to stay on for a few days and we had some wonderful conversations about the compassionate Victorian-era priest, Father Damien, now known as Saint Damien, and community life in the colony. It was a rich and deep time. 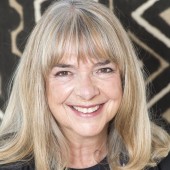 All stories by: Ann Mortifee
The Floating Stage
A Voice in the Darkness